Greyhounds are such wonderful pets it’s hard for owners to stop at one and so it is that we found ourselves adopting a second grey on 30 Dec 2016 after a 3-week trial period, our last act for the year. His name is Bailey — it was Buick — and he’s a 2 year-old from Queanbeyan. We adopted him from the same lovely foster family at ARF that also rescued Talbot.

Bailey never raced and he still has a lot of puppy energy in him. The decision to adopt him wasn’t an easy one. He has separation anxiety and he will chew the corners of our dining room furnitures whenever he’s anxious, which is often in the initial weeks. He also needs a fair bit of exercise — both mental and physical — every morning. His zoomies in the backyard is something to behold; whereas Talbot is all exhausted after two rounds, Bailey can easily do ten rounds and still have enough left in the tank for a tug-of-war.

I used to joke, with a sense of resignation on my face no doubt, that he’s a kelpie hidden inside a greyhound body. We needed all of my wife’s persistence to take the plunge with Bailey.

Now the good bits. Bailey is an angel outside, perfect on the leash and respectful with other dogs. He is also a problem solver and good at learning tricks. He’s food motivated and came knowing how to stand on a stool with the “Up” command. From there, he learns to respond to “Up” and “Up again”.

If you position two stools correctly, it’s also possible to get him to stand like this.

Just for contrast, Talbot never got past the first step of learning ‘Up’.

When Bailey was first rescued, his coat was in pretty bad condition, patchy and with lots of dandruff. After a lot of love from the foster parent and us — the trick is daily canned fish and fish oil — here is the before-and-after shot. 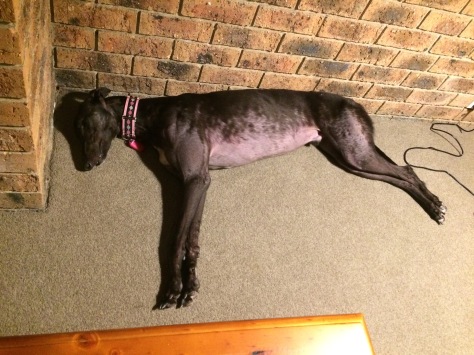 Talbot and Bailey get along well. Bailey is always up for a game of chase and Talbot mostly just tolerate Bailey’s puppy-ness. It keeps him young.

Like most greyhounds, both Bailey and Talbot love their squeaky soft toys. When we first brought home the green octopus, Bailey was literally inseparable with it. 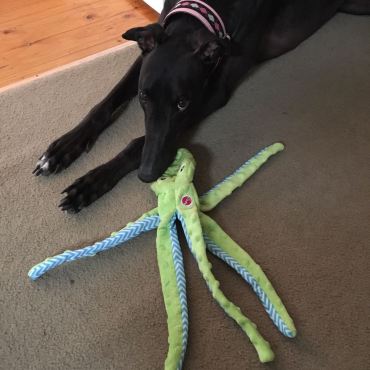 Here’s Talbot and Bailey on their morning walk with my wife the day after they passed their off-muzzle course. The beauty, the brawn, and the brain walking side-by-side on a chilly February morning.

One thought on “Bailey”