I put together this simple mapping of corporate leaders as a half-joke last week. 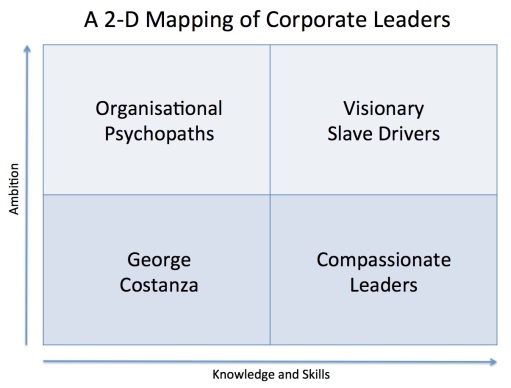 I think there’s something in it for everyone. (I’m an ex-consultant so naturally I think anything that requires more than two dimensions is unnecessarily complicating things. That’s another half-joke. :P)

Joke aside, there is a serious dimension to the post. Much has been written about methods and techniques to deal with a**holes in the workplace. In my readings, however, I have not encountered effective advice to deal with two special cases: 1) the calculating psychopath that is always doing things just short of outright bullying and harassment; and 2) displacement effect, or what happens when the psychopath moves to another organisation and start causing issues there.

The calculating psychopath is particularly difficult to deal with because each of their cases is usually a borderline call for HR and management, and they usually tone down their bad behaviour in the period after an issue is brought to HR. Everyone gets the signal that they are changing their behaviour for the better only to see the psychopath striking again after months of lying dormant, usually on another victim. The problem is compounded when the psychopath is also a good corporate performer, either someone who is competent in his/her job, or someone who is good at managing up, or worse, both.

The only technique I am aware of that works well on calculating psychopaths is the Enough Rope strategy. You know, give the person enough rope and the person will likely hang him/herself. The only way to incriminate a calculating psychopath is to demonstrate a history of bullying and harassment cases, where each may be borderline in nature, but as a body of evidence supports severe HR action like termination. So if you have a calculating psychopath in your organisation, move the person around in different roles and start collecting the evidence. It won’t be pleasant for everyone and it will take time for the body of evidence to reach a critical threshold requiring action, but it works.

This leaves us with the next problem: the displacement effect of psychopaths. Here’s a thought: construct a searchable database of psychopaths by collecting data from the public, perhaps using the Glassdoor model where a person can only search the database after inputing a psychopath known to them. Build in some safeguards using a voting or user-reputation system to vet the true psychopaths from the simply annoying, and provide a way for repenting psychopaths to drop out of the system if no reports are made about them after 18 months. Anyone?